The purpose of this test was to assess the accuracy that can be achieved using a geodetic grade GNSS receiver in static mode (non moving platform with static dynamics in the navigation filter).

The test setup (performed at the rooftop of Rokubun's headquarter offices at the MediaTIC building) is shown in the following picture:

The Septentrio AsteRx data has been processed with Jason with the following main characteristics:

In order to assess the results, the same data file (converter to Rinex) has been processed using JPL APPS online Precise Post Processing (PPP) tool. The differences are shown in the table below:

Note: PPP results (JPL and NRCan) were performed with ultra-rapid orbits (in the case of JPL) and also the data take was very short (2h), which in the case of PPP can be a drawback in terms of convergence time.

This test intends to provide an estimate accuracy of the best accuracy that can be achieved with a smartphone in the most benign environment possible (non moving, open sky, no multipath)

The smartphone was colocated on the same point at which the antenna of the static test. The data was then processed with Jason with the following processing strategy: 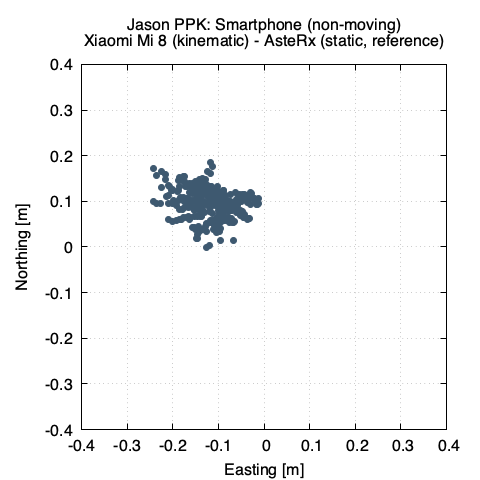